Uma’s Umbrage came out on January 21, 2019 that is part of the Alphabet Mail-Order Brides, a series consisting of 25 authors. I had several readers ask for more Uma books in the quirky town of Cryptic Cove, California. So. I decided to put aside other books I was working on, and write a series that I’m calling Cryptic Cove Mystery Series. Thank you for reading, communicating with me about your desires, and showing support! (Book 3: Uma’s Uproar. Book 4: Uma’s Urchins.)

Life is wonderful for Uma. She married her sweetheart, Cryptic Cove’s Sheriff Jack MacKissick. And she’s teaching, a job that’s her passion. Yes, life is grand … that is, until her unruly tongue gets away from her.

Her world comes crashing down when she sees Doctor Elroy Hancock in town and discovers he’s there … for good. She blames him for her stepsister’s death and is determined to force him to leave Cryptic Cove. But her fiery temper takes hold, and she tells him in public to get out of town, or else ….

When her threat comes to fruition and Doc Elroy ends up dead, poisoned with copious amounts of his own medicines—in the exact method she’d described—she realizes she’s in trouble.

For who heard her threats? Northern California Marshal Spivey. The U.S. Marshal declares Jack’s involvement in apprehending the murderer as a conflict of interest since his wife, Uma, is the main suspect. He takes over Jack’s office and jail, and then locks up Uma.

But Uma is in good hands. Because the Cryptians have a plan. Jack’s plan is even better. And once Uma is freed, she’s determined to find her nemesis’ killer, even if she must disobey Jack’s orders to stay out of it. But the killer isn’t finished. His eyes are set on Uma. 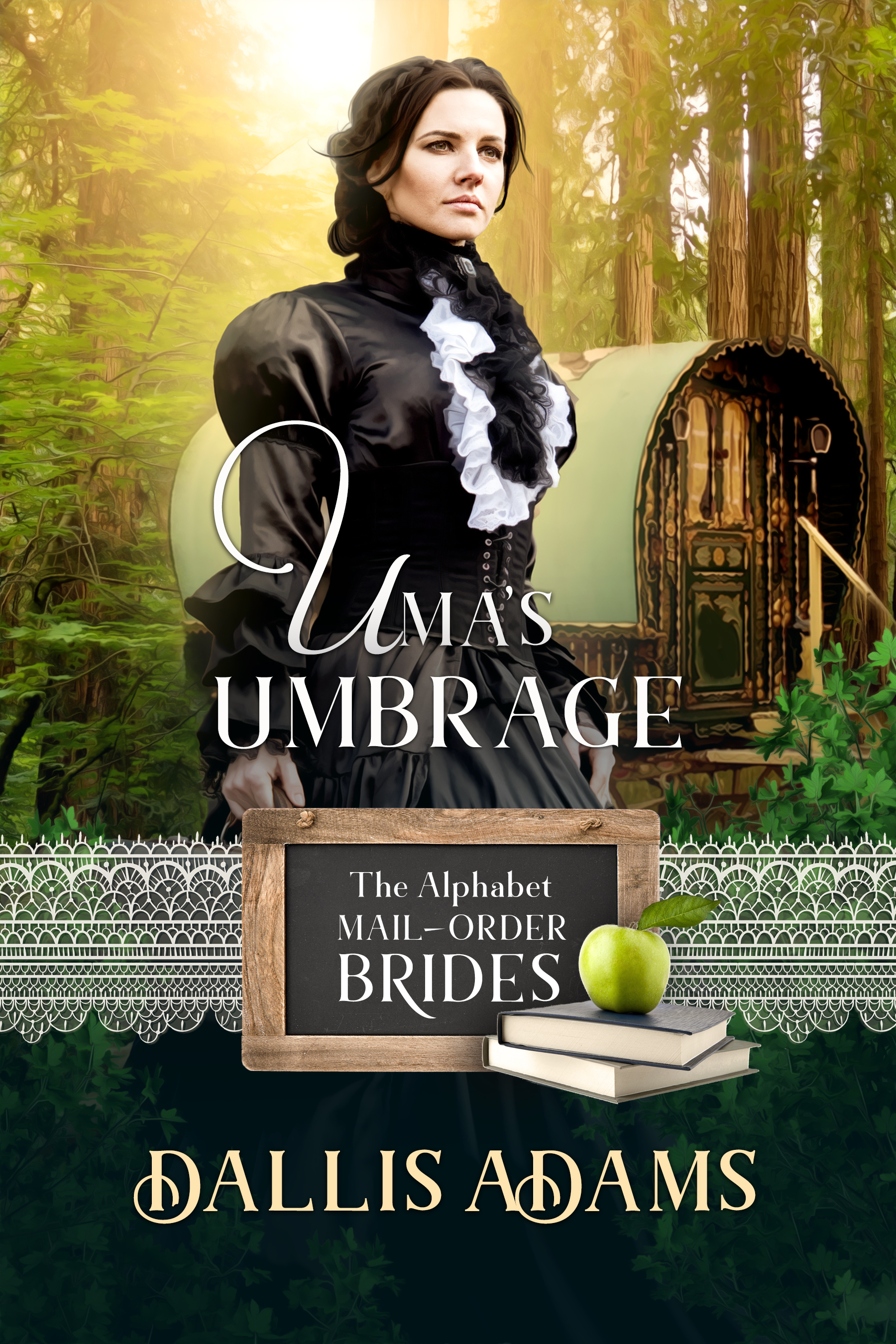 Uma is a spitfire who is usually in an uproar about something—whether it’s women’s rights, or the Morgan dollar, or labor laws for children.

But when she discovers the reason for her abandonment at the orphanage doorsteps was to save her infant self from the same demise as her murdered mother, she finds a new calling … Avenge her mother’s death, even if the only way she can pay for passage to Northern California is to become a mail-order bride.

Jack MacKissick has his hands full with his feisty mail-order bride, and is honor-bound to protect her. But he’s determined to keep an emotional distance from her because of a secret he has promised to leave buried.

However, hell is paved with good intentions; despite all, he discovers himself falling in love with Uma’s daunting spirit as time and again she gets into trouble by unearthing town secrets. And Jack is desperate to hide the one truth that could tear them apart.

Now he must save the feisty woman from an unknown killer who is bent on tearing them apart. Or is it Uma who ultimately must save him with her fiery will?

“Who sabotaged your mother’s swing?” Tillie blurted, as if she couldn’t hold in the question any longer.

“I don’t know.” Uma opened her eyes to look at the three dear faces that surrounded her. “But Wiggie said she had me trained for safety, so I could someday discover exactly what happened, if that was what I wanted to do. She wanted me to know how to defend myself, and to give me the wherewithal to make that decision.”

Tillie shook her head. “But why would anybody want to kill you and your mom?”

Uma blinked, still numb, and so confused. “My father was wealthy. Maybe one of his extended family members wanted those riches?”

As they waited in the crowd for their turn to exit, they were silent. Obviously her sisters were contemplating her situation.

“Was there anybody else who could have raised you for the past ten years?” Sally asked. “Although I’m selfish because I’m so glad you stayed with us at the orphanage.”

“Me, too,” Tillie said. “I wouldn’t have gotten to know you because that would have been around the time I arrived to live at the orphanage.”

“True,” Uma replied, absently, her mind still swimming with all the news about her past. “My stepmother and step-uncle are all that are left. And Wiggie said the sheriff wasn’t positive that I would be safe with them.”

All of them were finally able to step out onto the street, the late September evening unusually cold. As Tillie gave the valet the ticket to retrieve their carriage, Sally turned to Uma. “What are you going to do?”

She hadn’t known until this moment. But discovering the secrets of her past was what she’d been training for, thanks to Wiggie. All along her fate had been to discover who had deprived her of her birth-mother’s love.

“I’m going to go to Cryptic Cove, California. Find out who in blazes murdered my mother. But there’s one thing I’m not going to do.”

She gave them a grim smile. “Answer by my birth name.”

Rebecca cocked her pretty head. “Which is?”

This book was so well written I had no idea who the murderer was until the end of the story. The town was so determined to protect one of its own that a five-year-old confessed to a murder that had happened twenty years earlier. Uma never knew her parents, having been taken away at the request of her mother to keep her safe. Soon after her mother was murdered. Wiggie, having taken the threat seriously, had Uma trained in weapons and self defense. A good thing, because the murderer has set their sights on Uma.
Cheryl A