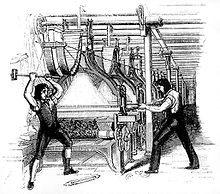 The public blamed the stockingers for low quality products, who in turn blamed the hosiers. That’s what led to the Luddite Rebellion, spearheaded by the imaginary General Ludd, who, like Robin Hood, was reputed to live in Sherwood Forest. The stockingers made up the general to protect them by having the government search for one fictitious person, as well as to give the people an ideal to look up to and to encourage them to keep up the rebel rousing. During the skirmishes stockingers would smash the looms.

This whole situation is the backdrop to Rescue a Rogue, the first book in my trilogy coming out soon, either late September or early October.

This site uses Akismet to reduce spam. Learn how your comment data is processed.